The Power of Simply Saline™ 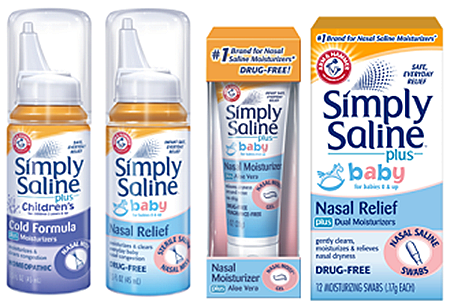 While in Chicago this past summer I received a sample of ARM & HAMMER™ Simply Saline™ Children’s Cold Formula plus Moisturizers (that’s a mouthful) and now that cold and flu season has reared its ugly head I wanted to share with you why I think it’s a great product. Please consider that my disclosure statement.

ARM & HAMMER™ Simply Saline™ products offer a drug-free way to moisturize dry, irritated nasal passages while relieving congestion and pressure. Personally I tend to be a bit skeptical of many over the counter medications, especially those for colds. Anytime I’ve taken them I either can’t stay awake or I’m fighting off an anxiety attack because my heart feels as if it’s going to jump out of my chest. Which is why I prefer using neti-pots and the kits in the Simply Saline™ line actually minimize the burning and stinging associated with nasal irrigation. Also ARM & HAMMER™ baking soda from Church & Dwight, Co., Inc. has been a fixture in homes, like my own, for more than 165 years and it’s a name I trust.

As much as I recommend using neti-pots, getting the kids to use one efficiently is nearly impossible which is why I’m so impressed with the ARM & HAMMER™ Simply Saline™ line of products geared towards babies, toddlers, and children (see picture above). Like I said before I personally received a bottle of the Children’s Cold Formula plus Moisturizers. The first time I used it was actually near the end of the summer with my six year old daughter who had a dreaded summer cold. It worked perfectly!

The spray is suitable for kids two years old and up, it’s affordable, you can use it as often as needed, it contains no zinc, and it’s non habit forming. In fact, according to ARM & HAMMER™ “The extra-strength, child-safe formula contains homeopathic ingredients that are established in the HPUS (Homeopathic Pharmacopoeia of United States) to be used for temporary relief of sneezing, runny nose and sinus congestion.” The bottle itself has a child safe nozzle that ensures one way flow, keeping the contents free of contamination and general ickiness.

If you’re looking for a way to battle colds and flus this season, especially when it comes to your kids, I highly recommend trying ARM & HAMMER™ Simply Saline™ products.