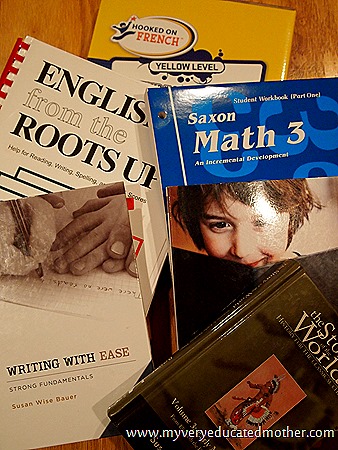 As we enter our third year of homeschooling and delve into new territories I’m reminded that the one thing you can always depend on is change. After spending a summer feeling lost and aimless I’ve decided to join the ranks of other (usually much more experienced) homeschoolers and make the switch to year-round schooling. So far things look hopeful, but I am still in the planning phase.

There are so many reasons to school year-round first there is the obvious and that’s less time spend reviewing at the beginning of a new year. Knowledge is lost over summer breaks, it’s inevitable, but with YRS you’re never getting out of that learning mode of thought so the transition from one grade to the next is that much easier.

Secondly it will hopefully curtail the “I’m bored” summer mantra. During a normal homeschooling day I usually let the kids take a quick break between each subject to run outside for a few minutes, build a Lego creation, or play a video game. Just like adults look forward to their weekends the kids looked forward to their breaks. Then summer time came and it was break time 24/7. An adult vacation can only last so long before the need to be productive kicks in, or at least it should, and the same is true for kids. They’re going to get bored because they’ve gone from being constantly challenged and learning to a time of constant play. Plus, where we live the summers can get unbearable and going outside to play is not an option.

For me the biggest reason to make the switch is the flexibility it will allow. I’m due in January which means the months leading up to the actual birth will be filled with Dr. appointments. My husband is usually off every other Friday and though I’ve tried to work around that in the past those days are usually shot and nothing gets accomplished. So when I fill in our calendars I end up erasing and moving lessons around, which leads to the second thing we’re doing different this year.

This year I’m not using a calendar. I mean sure, I’ll use one to set a basic rhythm for our schedule but on the actual lesson plan I’ve left the dates blank. It’s been a lot of work writing out a year’s worth of lessons but it has also made me breath a sigh of relief. NO MORE ERASING!! You have no idea how liberating it can be! In the past I also kept track of grades in a different database than the schedule. With the new sheets I’ve created, it’s all in one spot! Yay! They’re really simple but here’s a quick overview and link, I’m showing our Science plan for the year, I know it’s hard to read but hopefully you get the idea. 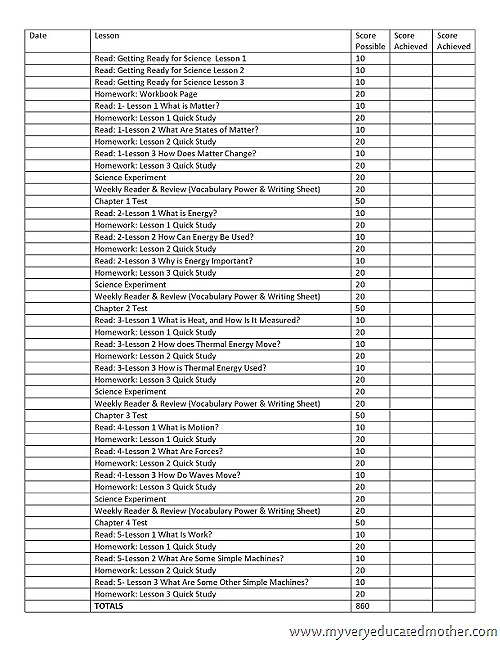 First column is for the dates that will be filled in as each lesson is completed. The only exception was for writing. We use Writing With Ease which runs on a four day weekly schedule so I made adjustments to the table to accommodate, there are four date boxes for each week.

Second column is the actual lesson. For some of the subjects I was vague and just listed the lesson number but for others I wrote out the pages that would be read and the workbook or review questions assigned. It’s really up to you but I would recommend getting specific, that way you won’t have to do as much writing and adjusting when you’re in the thick of things, especially for the high grade levels.

In the third column set the score possible for each assignment. I’m not one for grading on a curve or any other nonsense, you either get it or you don’t and if you don’t we need to work on it not cover it up with creative grading!

Fourth column is where the grade achieved is recorded. I teach many subjects to both my 1st and 3rd grader together so for those classes I added another column.

At the bottom of all the pages I added a row for totals, when you get to the end of the year it will be much easier to add up three pages than it would be 100 lessons.

We’re starting our school year in a couple of weeks so wish me luck and be on the look out for updates! This year I’m planning on writing my own Art curriculum and intend on sharing them as they are are completed or possible as an e-book. Decisions, decisions!

Sharing At: I Should Be Mopping The Floor,