It’s time for another round of Google Hangouts on Air and this time the subject is Valentines Day!
This week some great folks from throughout the creative community will be sharing crafting ideas LIVE. It’s really fun to watch and unfortunately, I forgot to post this yesterday so we’re already a day behind. As you can see from the button above I’ll be playing devil’s advocate, something I’m really good at, and going with some anti-valentine themed cards. It’s going to be a hoot.

To watch me LIVE just come right back here and below the button there will be a screen at least 5 minutes before go time.

To tune in to the other HoAs visit the sites listed below. Most of them will be hosting and posting their HoA directly to their blogs. If not you can also visit  the Google+ #ValentinesHoA event page!
P.S. Despite the fact that 50% of the population lives in the Eastern Time Zone (at least that’s what I read somewhere) everything for the HoAs is in PST. Make adjustments to your schedule if need be. 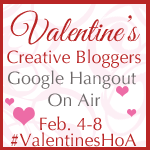 Here’s the lineup for the the week!

Thursday, February 7th at 10am PST
Little Ways to Show Your Love
with Amy Buchanan of Atta Girl Says

Thursday, February 7th at 12pm PST
{Topic to be Decided}
with Ashley Phipps of Simply Designing

Make sure you check out the #ValentinesHoA Google+ event page for even more live details.
Email Post
Labels: Crafting Holidays