No matter if you’re a homeschooler or not this month is always filled with anticipation for the next school year.  There are books to be bought, schedules to be made, and field trips to be planned  so I’m thankful that I saved some of the best (in my opinion) science experiments for this last month to keep me motivated and moving forward!  For this lesson we’re flip-flopping things to look at the ‘explanation’ before we actually do the experiment.

What is a spectrum and what does it have to do with light?  Like water, light travels in waves that peak and dip.  The distance between peaks is called a wavelength and different colors travel at different wavelengths.  Why is this important to know?  Because around 1665 Sir Isaac Newton discovered that white light, like sun light, wasn’t made of just white light wavelengths, it was actually composed of all the colors of the rainbow (blue, indigo, violet, red, orange, yellow, and green).  He made this observation with the help of prisms (triangular blocks of glass) that filter sunlight to create a spectrum of colors.  Thankfully we don’t need a prism to create our own spectrums.

Cut the slit in your black paper. 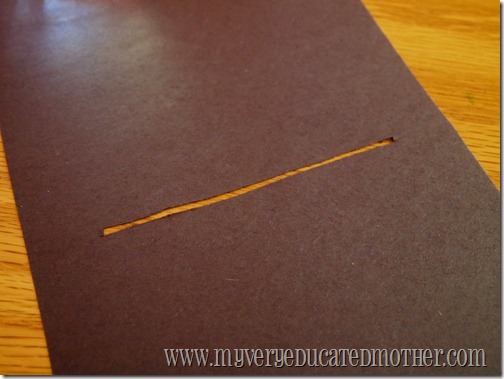 Hold, tape, or just prop the paper up against the glass of water.  Then position it so that sunlight shines through the slit OR just bust out a flashlight. 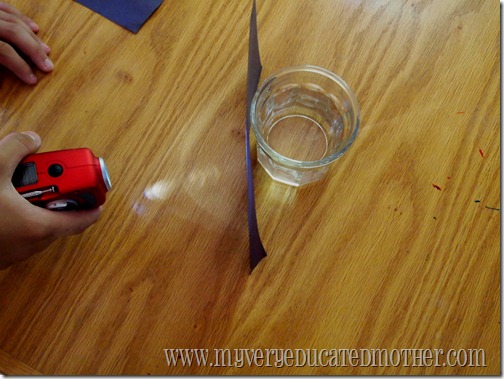 We chose to get an addition piece of black paper to try to create the spectrum on it and looking back we probably should have used white.  While we were able to create a kinda spectrum it clearly didn’t create the full range of colors we were hoping for.  Other negative factors might have been that the class was not smooth and the flashlight had that bluish LED light. 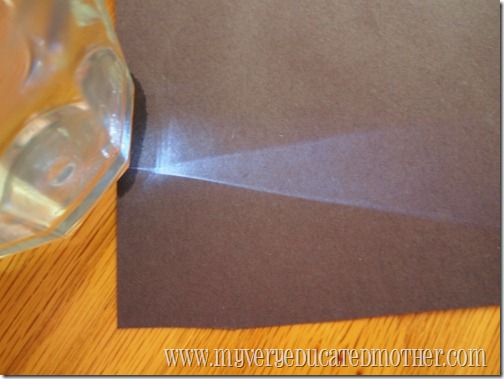 Next week we’re making a camera….YES IT ACTUALLY WORKED!!!  I’m so excited to share it with you!  Plus I’ll discuss the debacle that was making a flip book, I still don’t understand how my children didn’t get it!  They did however get still frame motion with the camera, go figure!

Subscribe today to get the Summer of Science Series delivered to your inbox!